We landed in Dubai and we were met by relatives of one of our friends. After a 12-13 hour flight, we wanted to get to the hotel, grab some snacks and go to bed. We quickly made plans to meet early in the morning and parted ways.

Our hotel rooms were rented at bargain prices, but they were anything but budget rooms. I walked into mine and saw a kitchen (complete with full size fridge, oven, stove, pots, pans and dishes), washer, big screen TV living room, dining area in the kitchen. The bellhop put my stuff in the bedroom and turned the lights on in the bathroom before leaving. I walked over to the bathroom and was a little surprised to find no shower or bathtub. There was a hose connected to the toilet and drain on the floor…so I thought to myself: is this a bidet, feet washing, shower and toilet? If so, that’s interesting. Nope…it was just the second toilet. There was a shower, toilet, bathtub, shower and sink in the bathroom attached to the bedroom. Nice!

Off to a local market, we bought the ingredients to make pasta, some snacks and breakfast food. After figuring out the stove and sharing some laughs about our trip so far, it was bed time.

I woke up and watched the sunrise through the window…not a cloud in the sky. It’s going to be a hot day in the desert. We headed to “old Dubai” with a quick stop at the Dubai museum -which happened to be closed. We walked around the market, visited the Hindu temple and surrounding market. Then we took a boat ride to see the Khor Dubai (Dubai Creek)…which was wonderful. We headed over to the gold market which was closed for the day, but you could peek in the windows of the local jewelry shops and see were people normally had stands for selling gold and jewels. Next we visited the spice market, which was an absolute sensory overload! Amazing colors, smells and activity.

We moved on to the Arabian Sea…dipped our toes in and sat on the beach soaking in the experience before heading downtown. We were off to the Dubai mall…which was just nonstop luxury and excess. Indoor aquarium, ice rink, amazing cars, jewelry stores, gold vending machines and a fountain show in front of the Burj Khalifa building…the tallest in the world.

We packed a lot in and had a long day. Everyone slept well for sure…after all, we had an early morning flight to catch; and 7.5 more hours of flying to do. 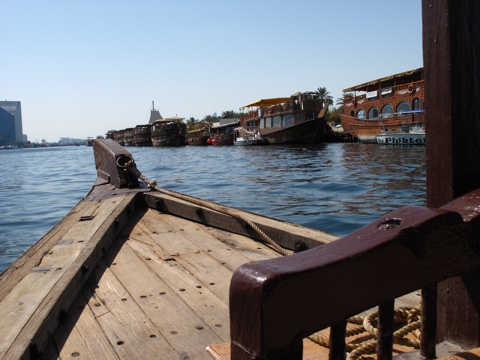 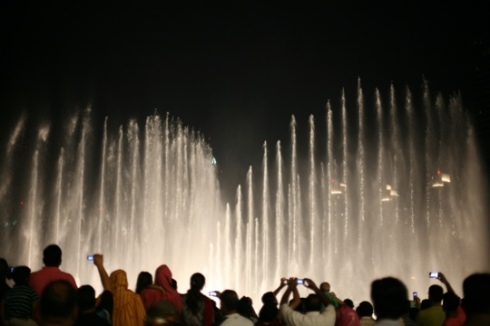